READY TO PLAN YOUR SHORE EXCURSIONS?

With a great historic past and incomparable art treasures, Venice is renowned as one of the world’s great cities. Its 118 islands are separated by more than 150 canals and spanned by 400 bridges. During Venice's artistic golden age many magnificent structures were erected to create world-famous masterpieces. One of the best sightseeing routes is along Grand Canal, with many palaces lining the famous waterway. St. Mark’s Square offers access to some of Venice’s most famed attractions - St. Mark’s Basilica and Doge’s Palace. From Piazza San Marco, a maze of narrow streets are lined with shops, cafés and restaurants. A popular pastime is sitting at an outdoor café facing the square while people-watching and letting the whole marvelous scenario unfold. Venice’s Murano, Burano and Torcello Islands comprise an area famous as home of Venice’s glass-blowing industry and known for their charm, skilled lace-making and medieval monuments. Relax on a gondola ride, see art treasures in museums, churches and palaces, and have a sumptuous meal - all in this incomparable city.

Many visitors have been enchanted by Rovinj and its beauties. At the 100-year-old institution of Rovinj Aquarium one can admire fauna of the Adriatic Sea. The Rovinj coastal area is well articulated with numerous bays, creeks, and capes. There are places of great natural and ecological value: forest park Punta Corente-Muntrav, St. Andrea's archipelago, the Palud marsh, the Limski kanal Fjord, and Monfiorenzo cave. The antique city center presents a unique Venetian urban and architectural model, built upon late antiquity and high medieval foundations. The historic nucleus is up on a hill, on a very narrow building area of former island, with houses bunched together up to the baroque St. Euphemia Church - which has a slender bell tower dominating the city. The ample Valdibora Bay is on the North side, and the pictoresque Bay of St. Catherine is on southern side of the city. Rovinj has numerous sporting associations, important scientific and research institutions, museums, cultural attractions, and educational instituitions.

Venetian styled buildings line the streets of this small and scenic town along the Istrian coastline in Slovenia. The violinist/composer Giuseppe Tartini was from here, and Piran's activity revolves around the square named after him. Multicolored, small boats often line the small harbor. Strunjan Nature Reserve sprawls between Piran and Izola.

Trieste is an interesting city and a flourishing center of trade and commerce. It was a literary and cultural center in the 20th century, and the town has Viennese influence and style - along with grand squares, palazzi and churches. The main square, Piazza dell'Unita d'Italia, has Viennese cafes, Palazzo del Governo, and Palazzo del Comune with its clock tower. All of these buildings were built in the 19th century. The promenade is a worth a stroll. Upper town, Colle di San Giusto - with its terrific views - has beautiful Castello di San Giusto and its musuem at the top of the hill, Piazza Cattedrale. Basilica di San Giusto is two churches in several styles, including Roman and Byzantine, with frescoes depicting San Giusto (the town's patron saint), mosaics, and the lovely rose window. The civic museum here has art, religious items and historical items inside. Orto Lapidario displays pottery and statues. Visit Civico Museo Revoltella. Stop at Castello di Miramare and her gardens. Villa Opicina has a wonderful belvedere and views, and Grotta Gigante is an amazing walkable cave museum. 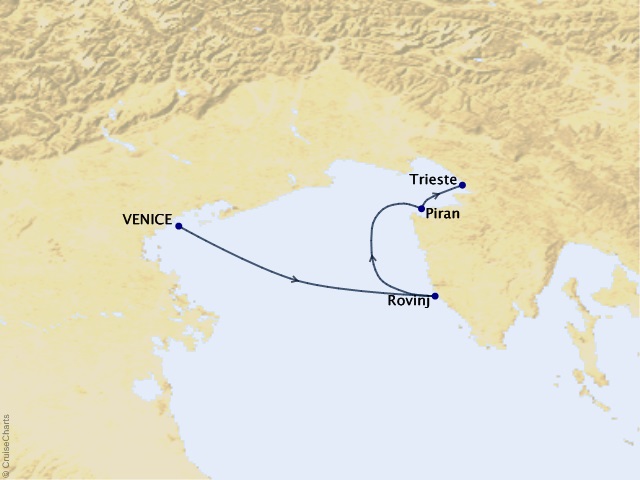 Rates are cruise only, per person, based on double occupancy. Government fees/taxes additional for all guests. Rates are subject to availability and may change without notice. Restrictions may apply. Fuel surcharges may apply. Please ask your travel counselor for details.

All prices per person and in USD unless otherwise stated.
Offer ID:
1335777