For many centuries, traders from Europe, India, the Orient and Arabia were lured to these shores. It was from here explorer David Livingstone set off on his last expedition into the heart of the continent. Today, as you walk along the winding streets of the old Stone Town, lined with whitewashed coral rag houses, you can see reminders of this rich history all around you. Visit the Palace museum, former residence of the Omani Sultans, and the cathedral that now stands on the site of the notorious slave market.

The holiday resort of Nosy Be has colonial French atmosphere galore. Nearby is the island of Nosy Komba and its free-spirited lemurs.

This busy port presents two contrasting aspects of Kwazulu-Natal's exciting wildlife heritage.The coastal St. Lucia Game Reserve is a fascinating wetland reserve with some of the world's highest forested dunes - and game including black rhino and South Africa's largest hippo and crocodile populations, as well as flamingo and other exotic birdlife. Inland extends the huge Hluhluwe Game Reserve which supports Africa's greatest concentration of white and black rhino - as well as lion and elephant.

Wonders of the Wilderness - Full Day

Port Elizabeth, in the Eastern Cape Province of South Africa, is situated on Algoa Bay in the Indian Ocean. It is an important seaport and manufacturing centre, as well as a popular resort noted for its fine beaches. Worth visiting are the King George VI Art Gallery, featuring collections of British and South African art; the Port Elizabeth Museum, with natural history exhibits, an oceanarium, and a collection of reptiles; and Fort Frederick, built by the British in 1799. The Addo Elephant National Park is nearby. The community developed around Fort Frederick.

Cape Town is southern Africa's most beautiful, most romantic and most-visited city. Few urban centers anywhere can match its setting along the Cape Peninsula spine, which slides like the mighty tail of the continent into the Atlantic Ocean. By far the most striking - and famous - of its sights is Table Mountain, frequently mantled by clouds, and rearing up from the middle of the city to provide a constantly changing vista to the suburbs below. Table Mountain is the city's solid core which divides the city into distinct zones with public gardens, wilderness, forests, hiking routes, vineyards and desirable residential areas trailing down it's lower slopes.

The Best 8 Hours In Cape Town 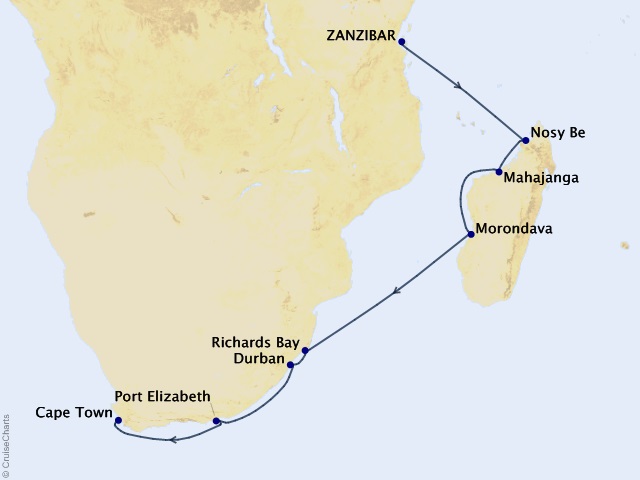 Departure Date:
4/12/2021
Number of Nights
14
Cruise Inclusions:
Remarks:
Fares listed are per person, based on double occupancy, unless otherwise noted.

All prices per person and in USD unless otherwise stated.
Offer ID:
1355853