14-night The Sea of Okhotsk Cruise

The extravagant tastes of the Czars extended all the way to the Russian Far East, which lured with the promise of caviar, sable and mink. Today, the draw to Petropavlovsk-Kamchatsky is volcanoes—some dormant, some active—rising majestically from a chromatic tundra.

Remote and ethereal, Vestnik Bay is a wildlife refuge and preservation area in Eastern Russia. Taking in the serene landscape, you may catch sight of local wildlife such as arctic foxes or sea eagles.

Atlasova is a small island that is made of just one gigantic volcano, called Alaid volcano island is named after Vladimir Atlasov, a 17th century Russian explorer who incorporated the nearby Kamchatka Peninsula into Russia. It is essentially the cone of a submerged volcano called Vulcan Alaid protruding above the Sea of Okhotsk.

Its near perfect shape gave rise to many legends about the volcano among the peoples of the region, such as the Itelmens and Kuril Ainu. The Russian scientist Stepan Krasheninnikov was told the story that it was once a mountain in Kamchatka, but the neighboring mountains became jealous of its beauty and exiled it to the sea, leaving behind lake Kurile in southern Kamchatka.

Although Korsakov and the Sakhalin District owe their existence to the less-than-glamorous industries of fishing, coal and oil, the typically Russian cities of this peninsula have always managed to sneak in a little fun, even during the height of Communism. Amid the Lenin statues and austere buildings, colorful flowers add cheer to the city streets, and lively markets offer brightly hued fruits and vegetables that make it from the hinterland to the table in just a matter of hours.

Otaru is located on Ishikari Bay of the Sea of Japan on Hokkaido Island. With a name meaning "sandy beach", Otaru developed as a modern town in the late 19th century. Provided with a good natural harbour, it is the port for the city of Sapporo, the largest city and capital of Hokkaido Island and site of the 1972 Winter Olympics. Visit the Asarigawa Spa, Otamoi Park, and the Otaru Aquarium, one of the largest in Japan. Sapporo, laid out in 1871, features wide, tree-lined boulevards and some beautiful Botanical Gardens incorporating the Ainu Museum and Sapporo Art Park. The Sapporo Beer Garden and Museum and the Historical Village of Hokkaido are also well worth visiting. 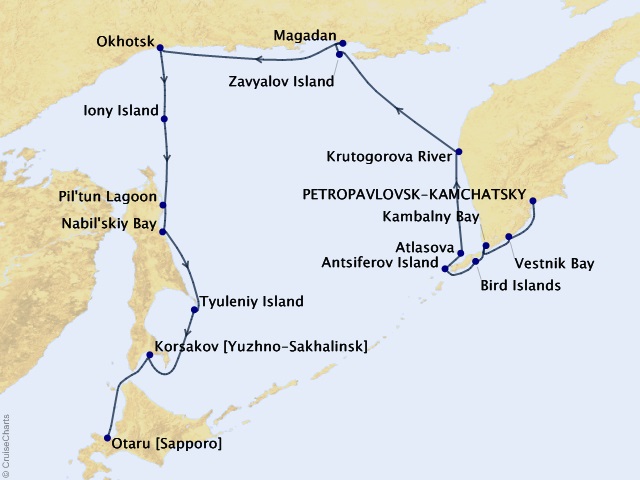 Departure Date:
10/4/2021
Number of Nights
14
Cruise Inclusions:
Remarks:
Fares listed are per person, based on double occupancy, unless otherwise noted.

All prices per person and in USD unless otherwise stated.
Offer ID:
1381666